Between Salzburg and the Zillertal valley, there are numerous historical and geographic points of interest. Until the year 1816 large parts of the 40 kilometre long trough belonged to Salzburg, afterwards it was united with Tirol. The Ziller river still forms the diocesan border between the church provinces of Salzburg and Innsbruck (formerly Brixen). Which buildings belong to Salzburg or Innsbruck is easily distinguishable. Churches and clergy buildings with green roofs belong to the archdiocese of Salzburg, the red to the ecclesiastical administrative unit of Innsbruck. The green colour goes back to the use of copper, which could be used by the wealthy diocese of Salzburg for its churches, while the Bishopric diocese had to be more economical and worked with clay or larch tiles.

The tiled roof of the parish church of Hippach is also clay red and it is from this district Laimach where the Strasser family with their four siblings originate from. The father, Lorenz Strasser, was a farmer, shopkeeper and glove merchant who travelled to Leipzig and Berlin every year in the period between the advent season and Candlemas on the second of February to sell chamois and goat leather gloves as well other wares on the market. At this time of the year, the Alpine pastures were snow-covered and agriculture work not possible. This commodity trade was a welcome and necessary addition to the farmers. The children Anna, Josef, Amalie, Caroline and Alexander accompanied their father on his travels. 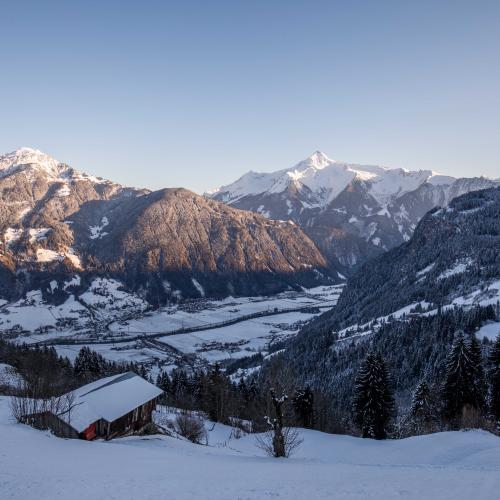 An early writing of the song

At Christmas 1831, the farmer family from the Zillertal valley had a booth at the Leipzig Christmas market, where, besides selling the goods from home, they also sang Christmas songs, including “Silent Night”.

The “larks from Zillertal”, as they were called, were dressed in traditional Tirolean costumes and thus met the pulse of the times: Fashion from the Alps and Tirol enjoyed great international popularity. In addition, the interest in the folk song awoke in courtly circles. The business-minded farmers from Zillertal recognised the desire and were able to fulfil them. The enthusiasm of the market-goers was so great that the Strasser siblings were asked to sing the Christmas mass for the Leipzig Catholic community. In January 1832, an appearance followed in the Leipziger Gewandhaus.  The same year, another concert was held at the Hotel de Pologne in Leipzig. Between 1832 and 1834, the publisher A. R. Friese from Dresden published a collection of real Tirolean Christmas songs also featuring “Silent Night”. Due to their success in Leipzig, the Strasser siblings set out for a concert tour throughout Germany, including a performance in front of the Prussian King Friedrich Wilhelm IV in Berlin. Their gripping performance of this Christmas classic also inspired others. After a performance by the Strasser family, the Berlin Cathedral choir took up the song into their own repertoire. King Friedrich Wilhelm of Prussia IV even declared it as his favourite tune. After the early death of Amelia Strasser in the year 1835, the Strasser siblings no longer appeared publicly. But the piece of music they created continued its journey around the world.

On the trail of “Silent Night” in Hippach:

The Rainer and Strasser singing families from the Zillertal valley

The global journey of “Silent Night”